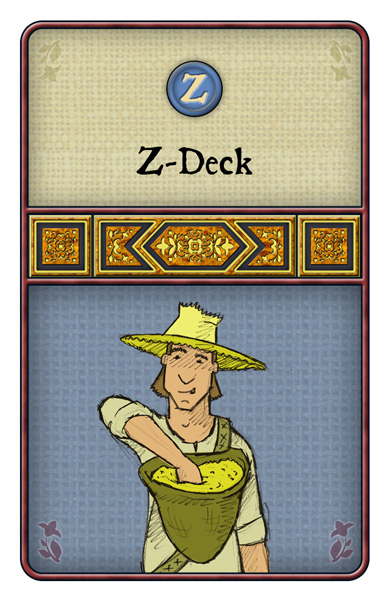 The Agricola: Z-Deck is a 24-card Promo Deck for Agricola. It was developed in 2007 by Uwe Rosenberg, Hanno Girke, Melissa Rogerson, and Klemens Franz as a bonus for the first printing of Z-Man games English edition of Agricola, but was also released in other languages. Later Z-Man editions do not contain the Z-Deck. It comprises 12 Occupation and 12 Minor Improvement cards.

Can I use this expansion with the revised edition of Agricola?

Yes-ish. The revised edition uses unified phrasing, reworked cards and a modernized graphics design to deliver a more conistent and overall better (at least in our opinion) game flow and feel. Mixing old and new version parts therefore might create problems. Nonetheless, the overall mechanics of the game haven't changed, giving people with an advanced understanding on how the game works the possibillity to "ignore" these problems; at least to a certain extend. However, we only recommend mixing old and revised edition for such "professionals".