Attention: This is an automatically created archive entry. It is possible that not all functions (links, images, etc.) work as intended. Please contact us using the contact formular "I found a problem with one of your homepages." in our "Contact us & Help" section and we will try to fix the problem as fast as possible.

Spirituality is nothing you can force and therefore our newest release took a little longer than "Foothills" and the "Bad News Bears" expansion: 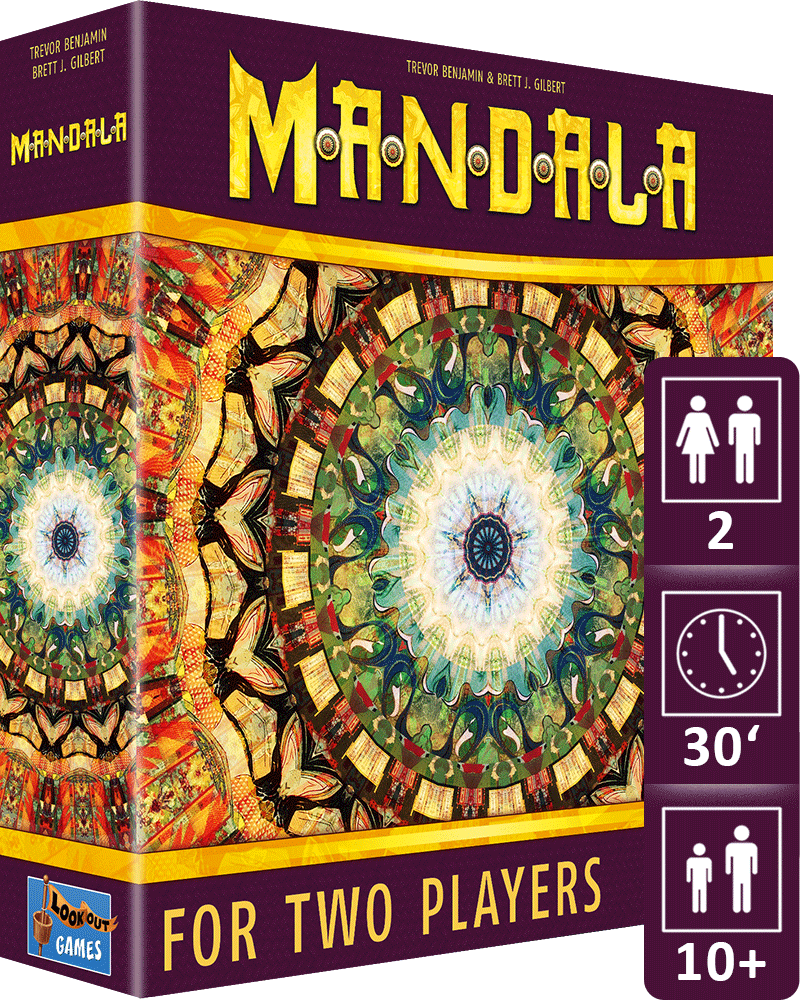 The Mandala: the symbol of an ancient and sacred ritual. Colored sand is laid to create a symbolic map of the world, before the pattern is ceremonially destroyed and the sand cast into the river—an ever repeating cycle of life, death, and rebirth.

With a slow and steady movement from your wrist, you cautiously pour the last remaining sand onto the edge of the Mandala. After standing up you look at your masterpiece, being satisfied with its looks. Black sand was a good choice as the color stands for death and renewal and that is exactly what is going to happen next. The ceremonial destruction of the Mandala represents the renunciation from the physical world as well as the rebirth. Like the next Mandala which is already starting to form in your head, ready to flow through your hands into a new and beautiful artwork. Mandala from Trevor Benjamin & Brett J. Gilbert is not quite as spiritual. This tactical 2 player game lets players from 10 and up compete in the creation of Mandalas. In about 30 minutes several Mandalas are created and destroyed and the players try to earn as many victory points in this process as possible by collecting the different colors their - abstract - Mandalas are made of. Who will earn the most points? Who will be the master of Mandalas? You start the game with a hand of six cards and the central playing mat, displaying two Mandalas and a River and Cup for each player. The Mandalas are separated into three areas, the Mountain area in the middle and the two player areas on their respective sides. On your turn you can choose from three actions: Either you play exactly one card into the Mountain area of one of the Mandalas and draw up to three new cards, or you play any amount of cards of exactly one color in your personal player area. Using one of these two actions, you have to follow the Rule of Color! This rule states, that in a Mandala each color may only be found in exactly one area. In other words: if red is already located in the Mountain area, you can not play red cards into your player area (but you could play a red card into the Mountain area). As a third action you can choose to not play any card into a Mandala at all, but instead put any number of cards of the same color onto the discard pile and draw exactly the same amount of cards you discarded. After you finished your turn, you check if a Mandala has been finished. This means: all six colors of the game are represented in that Mandala. If that's the case, the ceremony of destruction happens. Beginning with the player who has more cards in their player area, that player choose one color from the Mountain area, takes all cards of that color and adds them to their River and Cup. The position of the color in your River determines how much victory points the cards of the same color in your Cup are worth for you at the end of the game. The game ends either when the draw pile is used up or one player has all six colors of the game added to their River. You already want to find your inner peace with Mandala? Good for you! The game should already be available or will become available shortly, e. g. in our Online-Shop. Accordingly the rules are also available by now from our download section or directly below this article: Rules: Mandala (EN) And even better: Mandala was demoed during GenCon and the folks from AsmodeeLive were kind enough to make a video about it: Mandala - A Game of Colours - Gen Con 2019

You want to stay up to date? Follow us on Face­book or Twitter and don't miss any updates.