Expansion for 5 and 6 players 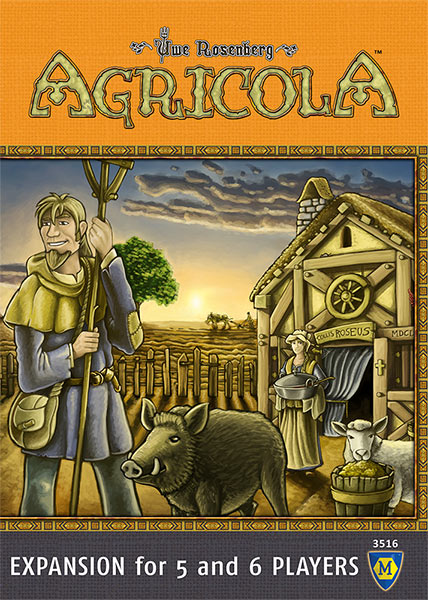 Delve into the world of Agricola with up to 6 players!

This expansion provides the necessary components for the fifth and sixth player as well as additional wooden and cardboard pieces so you do not run out of goods and tiles during the game. Additionally, the expansion comes with 48 new occupation cards, which are specifically designed for games with five or more players, as well as eight additional major improvement cards so that more players get their chance on a cooking hearth or oven. As a celebration of us winning the Kennerspiel des Jahres award with Isle of Skye, four promotional Scotland themed minor improvement cards are included. The expansion is topped off with a two-sided game board extension with new action spaces for five and six players.

Can I use this expansion with the old edition of Agricola?

Yes-ish. The revised edition uses unified phrasing, reworked cards and a modernized graphics design to deliver a more consistent and overall better (at least in our opinion) game flow and feel. Mixing old and new version parts therefore might create problems. Nonetheless, the overall mechanics of the game haven't changed, giving people with an advanced understanding on how the game works the possibility to "ignore" these problems; at least to a certain extent. However, we only recommend mixing old and revised edition for such "professionals".