A hack of a plan 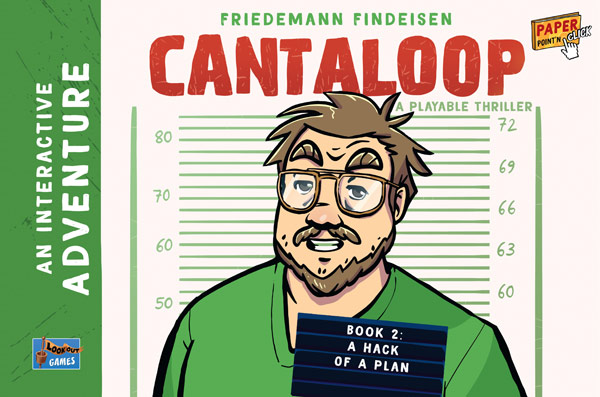 Introduction from the book

The point-and-click adventure game genre was born in 1976 on the PC. In this type of game, the player assumes the role of a character in an interactive story driven by puzzle solving and exploration. Popular titles include Myst, Telltale's Walkind Dead series, and all those games about ape archipelagos that you loved as a kid, but we won't name lest we be sued. This game is a direct adaption of these mechanics to the cardboard medium that requires no electronics to play. In other words, you are holding a classic point-and-click adventure game in book format. You will talk to characters, combine items to solve puzzles, and explore a unique world to get ahead in the story.

After the chaotic but successful events in Cantaloop - Book 1: Breaking into prison, Oz Hook Carpenter has gathered his team. The goal is clear but how to make use of your contrabands unique skills in this PAPER POINT&CLICK? You have to hack a watertight plan of revenge against the citys biggest crook! Explore beautifully illustrated locations, chat with new characters, solve more of those tricky puzzles.

Are you clever enough? Find out in Cantaloop Book 2 - an INTERACTIVE adventure book.

"Hook" Carpenter is a charismatic and resourceful crook. Ten years ago, he was betrayed, forcing him to go undercover. Now he's back and he's looking for revenge. He's already found a team in the jazz singer Alice and the hacker Fly; now the preparations start: Blueprints need to be stolen, computers need to be hacked, and people need to be conned. The day of the biggest heist of the century moves closer and closer ... and it looks like the team will need a hack of a plan.

The "Interactive Adventure" series by Lookout Games is a story game in book format. Like a computer "point & click" adventure, this game tells a non-linear story full of quirky characters, useless items, and tough riddles. Explore different locations, collect and combine items, talk to different characters, and find out how the story unfolds. 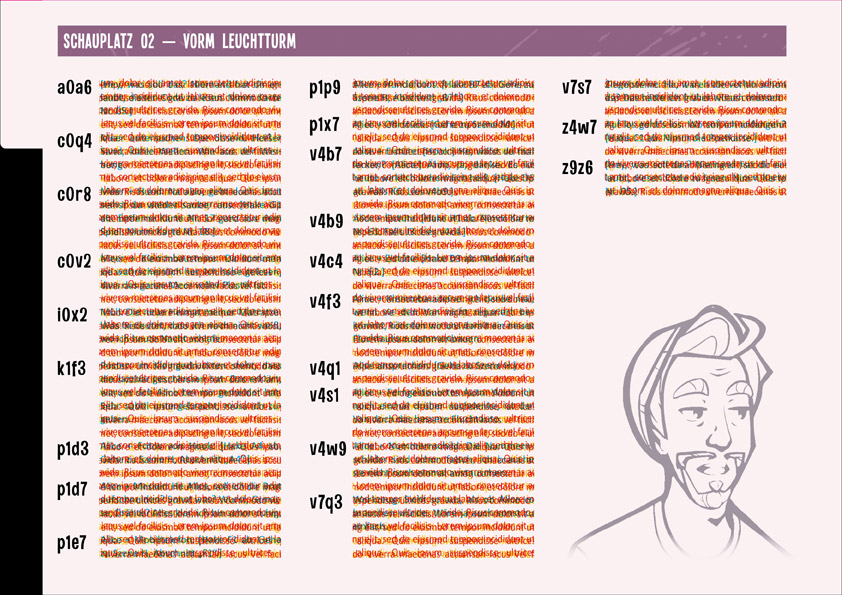 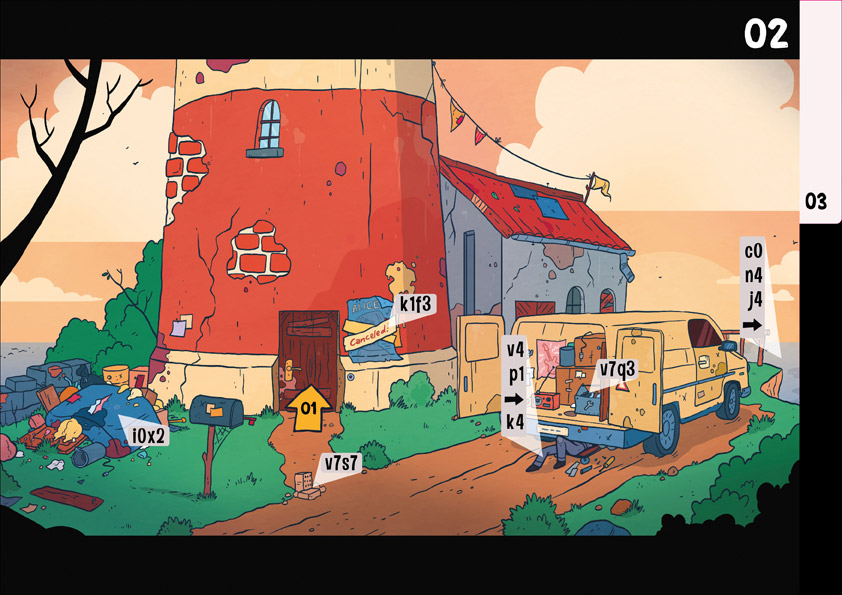 location - no spoilers. you need the cards to explore this :) 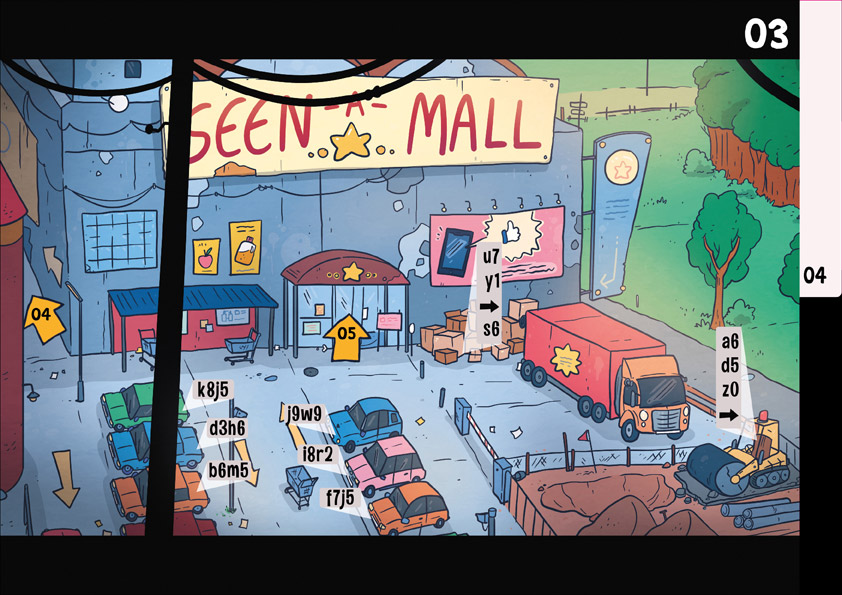 another nice location. any clues? 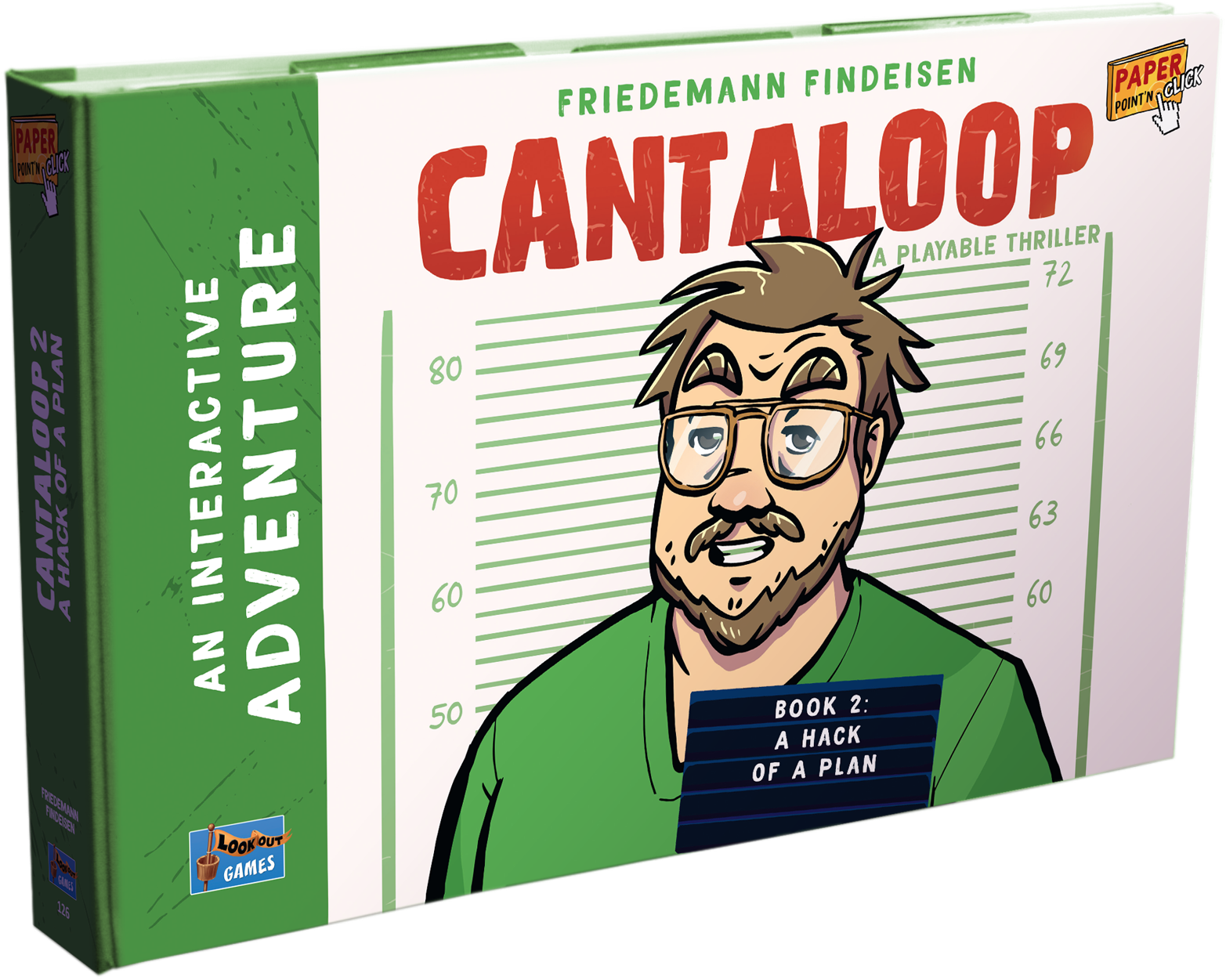 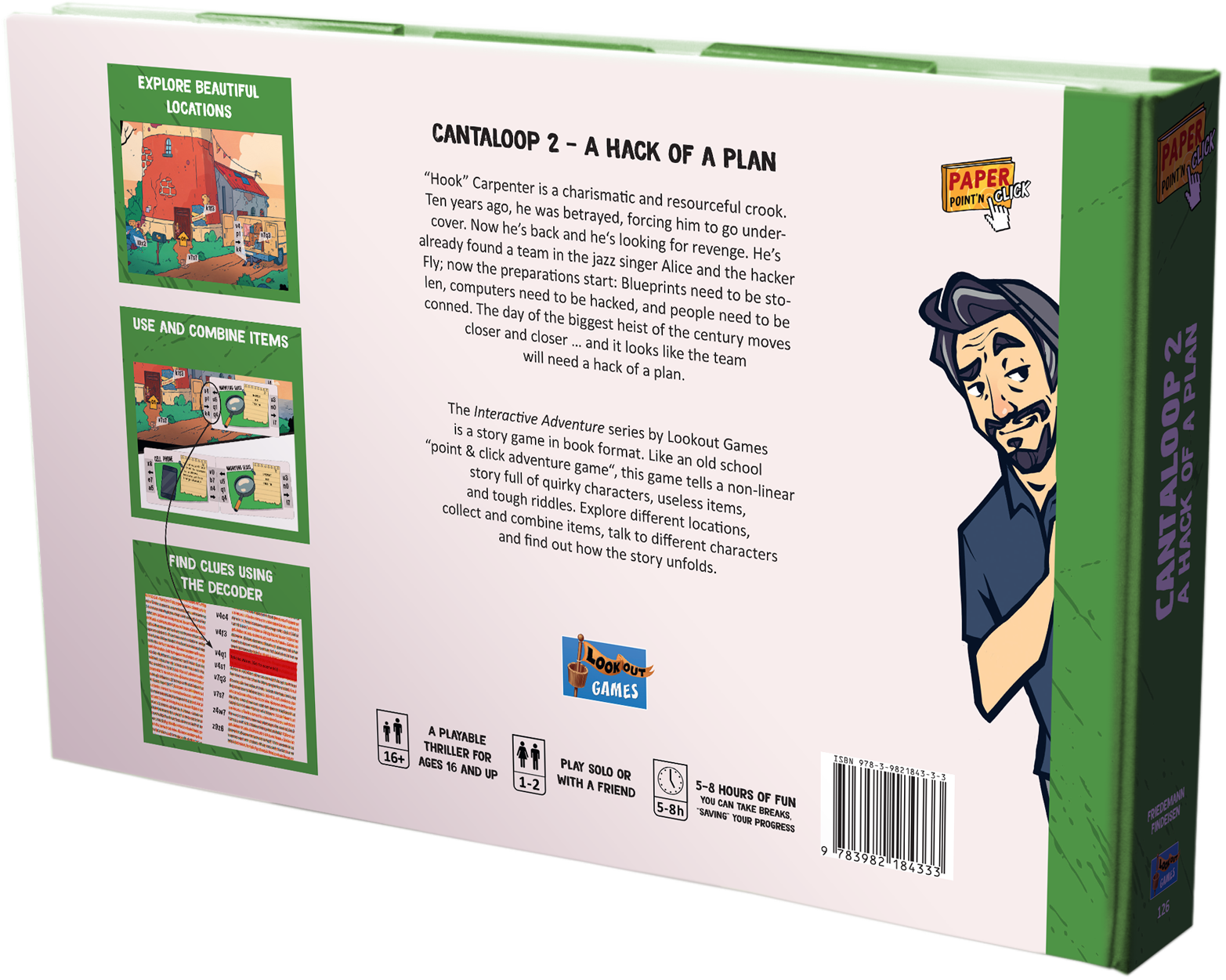 backside of the adventure book

I heard there is a prequel story freely available as download. Where can I find it?

Just head over to our games page and click on "Cantaloop - Book 0: The Prequel" (or use the link given in the description above).

OK, lets be honest: Is this just another escape room game?

No. While the game mechanics certainly could be used to create an escape room style game, "Cantaloop" is not doing this. The game is more like a classic "Point & Click" adventure, known from PC.

"Cantaloop" is an interactive book and so are the rules. The introduction of the book teaches you all rules on the fly so that studying the rules is not necessary!

I got stuck in this storyline somewhere in scene B. Can you help me?

Yes, we can. Unfortunately, there happened to be not one, but three minor (but absolutely story relevant) bugs on page 1 of scene B. To get you on track again, there is a replacement sheet. If your copy of Cantaloop Book 2: A Hack of a Plan does not come with this replacement sheet already and/or the store you bought your copy from can not provide replacements, you will find it in the DOWNLOAD section of this page. Please print and add it on the page mentioned. We are really, really sorry. Thanks for your understanding!