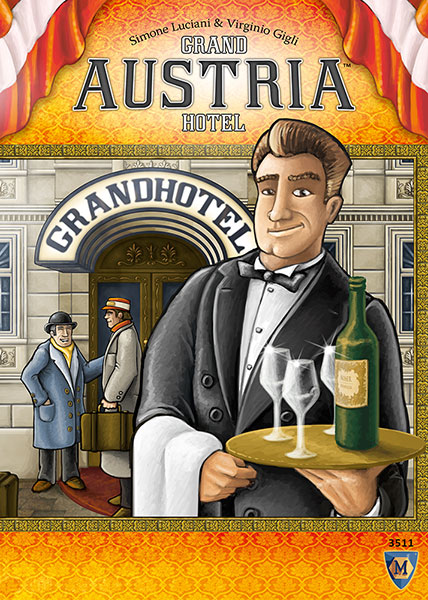 At the beginning of the 20th century, Vienna was one of the major centers of Europe. Artists, politicians, nobles, citizens, and tourists populated the streets of the city, and the emperor ruled them all. You are in the thick of the Viennese Modern Age, trying your luck as a hotelier. For that, you must expand your little hotel and prepare new rooms. In the meantime, your guests require culinary excellence. Make sure each and every guest receives a proper dish and drink. You may need to hire additional staff. Despite all that, do not forget to render homage to the emperor, or you will fall into disgrace pretty soon.

Face the challenge and turn your little hostel into the Grand Austria Hotel!

The starting player rolls the dice and puts them on their appropriate spot, according to the number of dots shown. In turn order, every player now chooses one of the six available actions. The efficiency of the action depends on how many dice have been added to it. After choosing one action, the player removes one die (making the action less valuable for all the other players to come) and carries it out. They might also carry out some more special actions. Afterwards the players do the same again, but against the turn order (thus, the turn order in e. g. a 2 player game is 1 - 2 - 2 - 1).
Available actions are e. g. preparing rooms, preparing dishes, hiring staff or swarm the emperor. But a hotel without guests is useless. Only hoteliers managing to attract the right guests at the right time will be successful. Getting them to your table and place them in one of your rooms does not only yield victory points, but also grants you with additional special actions. In combination with the right stuff this is your way to victory. But you also have to pay attention to the remaining rounds. As there are only 7 of them in total you can't always do everything and need to make decisions on what is more valuable and what not. And because only part of the 116 cards will be available throughout a game, plus the fact that you can't count on the order in which they will show up, you have to constantly adapt your strategy to the current situation. A guarantee for a lot replay value!